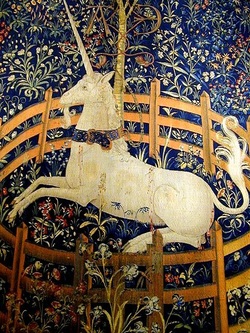 Back in the 1500's, although only a few people had ever "seen" a Unicorn, it was widely believed that they existed. So, when Edward Topsell published Historie of Four Foot Beasties, the first illustrated natural history in English, in 1607, he included unicorns.

Here are some excerpts from the original version of the book. Remember, as you read, that these descriptions were considered science, not fantasy.

We will now relate the true history of the horn of the unicorn. The horn grows out of the forehead between the eyelids. It is neither light nor hollow, nor yet smooth like other horns, but hard as iron, rough as a file. It is wreathed about with divers spires. It is sharper than any dart, and it is straight and not crooked.
The horn of the unicorn has a wonderful power of dissolving and expelling all venom or poison. If a unicorn puts his horn into water from which any venomous beast has drunk, the horn drives away poison, so that the unicorn can drink without harm.

Unicorns are very swift. They keep for the most part in the deserts and live solitary in the tops of mountains. 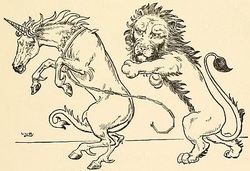 The unicorn is an enemy to the lion, wherefore, as soon as ever a lion sees a unicorn, he runs to a tree for succor, so that, when the unicorn makes force at him, he may not only avoid his horn but also destroy the unicorn, for, in the swiftness of his course, the unicorn runs against the tree wherein his sharp horn sticks fast.
Then, when the lion sees the unicorn fastened by his horn, he falls upon him and kills him.